Coco-NUT (by Mora and sometimes Janine)

Corinna "Coco" Spencer Chaodiamond is a character created by AyKooChao, who will finish this page later.

Coco was born in Milwith, Miptown on the 23rd of January W1816, three minutes before her younger twin sister Kiki. (Don't bring that up, though, or Coco will meeble about it for hours.) She was the first daughter and second child of Elliott and Vanessa Spencer.

Coco was twelve years old when Consistency Nottagen forgot that she was the Grand Supreme Mip and the Mipdom was passed on to some random weirdo. This weirdo, Ay-Koo Tay-Bay Creativa Incredulous Onomatopoeia Clickpencil Chao, invited Coco's family to live with her in Mipley Mansion. They accepted, and one month later, the Spencers made the trip from Milwith to Santrell, where they took up residence on the second floor of the mansion.

In W317, she got a part-time job at Papa's Donuteria, but was fired after three hours for causing the Infamous Strawberry Icing Incident. One month later, after she managed to wash all the pink out of her hair, she started working at Papa's Cheeseria instead, to the annoyance of her new co-worker Ramona Vega.

Coco is an upbeat and energetic cornflake who is rarely completely serious about anything.

"Coco, I spent four days on that!"

Coco and her older brother, Len, don't always get along. Coco often annoys Len by (pick one) shredding/scrunching/hiding/eating/flushing/vacuuming up his homework, believing that she's "saving" him from it.

"Workin' at the Cheeseria~! Meltin' Fiery Flatbreads all day~!"
-Coco singing in the Mipmobile (and annoying Ramona) on the way to work.

"Sorry, I had to do that. She was startin' to speak in code..."
-Coco explaining why she just threw her phone into some pancake batter.

"Dude, I don't even like Hyper Green."
-What Coco says to anyone, male or female, who suggests that she's had too much Hyper Green.

"I just don't know what went wrong! Is it my hat?"
-Coco getting confused about something.

"There! That homework's never gonna annoy anyone again~"
-Coco after shredding her homework in the kitchen sink.

Would someone get that tomato out of here? Also reqweeted by Ianiant.

Coco wants to play a minigame with Choco at Powder Point.
Add a photo to this gallery

Coco drawn by Brother Z of JEBZ Komics.
Add a photo to this gallery 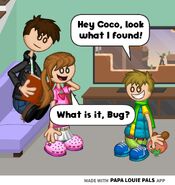 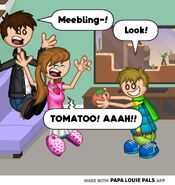 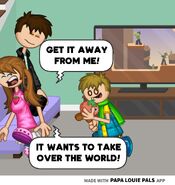 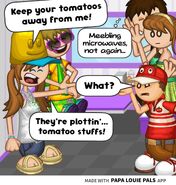 Freaking out at the Freezeria 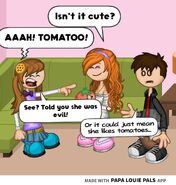 Coco's tomatophobia rears its ugly head yet again.
Add a photo to this gallery
Retrieved from "https://fliplineforumfancharacters.fandom.com/wiki/Coco_Chaodiamond?oldid=4250"
Community content is available under CC-BY-SA unless otherwise noted.